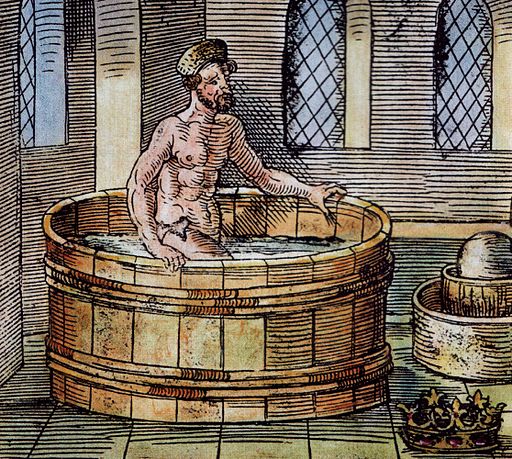 As the story goes, sometime about 2,300 years ago in ancient Greece, the philosopher, mathematician, physicist and mechanic by the name of Archimedes was charged by his king with the task of determining if his golden crown was in fact composed of pure gold, or if the goldsmith had cheated by removing some of the gold and replacing it with less precious silver.  The weight of the crown matched the weight of the original gold bars, but that measure did not answer the question as to the purity of the metal.  Archimedes laboured over the problem for days without finding the answer.

He decided to take a break from his puzzle and headed for the public baths.  After some time lounging in a tub of warm water, he noticed that as his body moved up and down, so too did the level of the water.  He discovered the principle of displacement, which could be used to measure volume, and by extension, mass.  This was the solution to his puzzle.  The legend has it that he jumped from the tub and shouted “I have found it!  I have found it”, or in Greek: Eureka!

That’s a long-winded way of making a simple point: problems are often solved and new ideas frequently conceived when the conscious mind is not focussed on the issue.  Who has not had an “Ah ha!” moment in the shower, while exercising, or while doing something rather mindless?